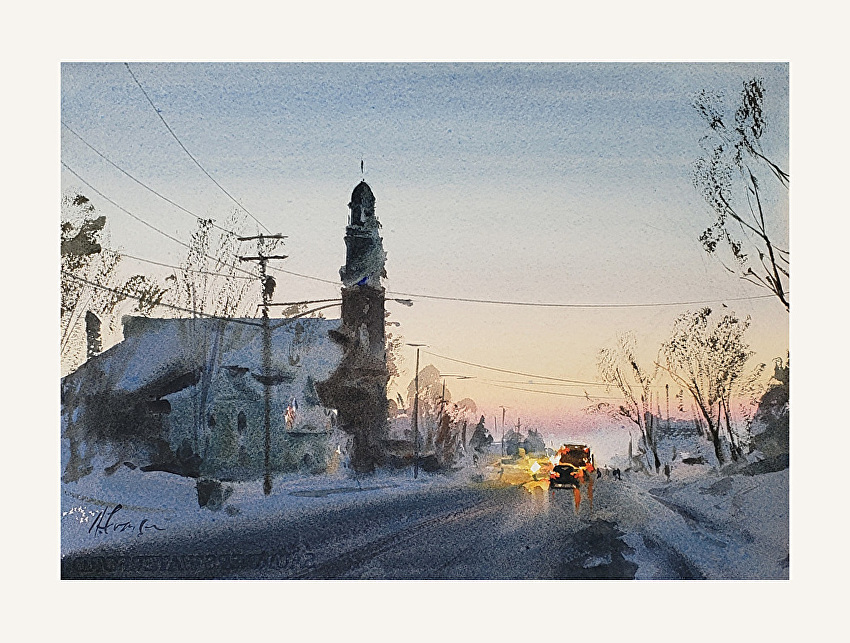 Andy Evansen will be demonstrating in our monthly member meeting, Thursday, February 13, 2020. There will be a meet & greet from 6:30 to 7:00 pm, followed by meeting and demonstration at 7:00 at:

Andy Evansen’s interest in art started in childhood, as he can’t recall a time when he wasn’t drawing. He began painting watercolors in the mid 1990s as a change of pace from his career as a medical illustrator. Choosing a ‘style’ was not difficult, as Andy was always inspired by the watercolor paintings of British artists Trevor Chamberlain, David Curtis, Ed Seago and Edward Wesson, among others.

He found himself attempting to capture the landscape with the same economy of brushstroke, taking advantage of the luminosity of watercolors done in just a few washes. In addition, he was impressed with the way those artists seemed to capture everyday scenes in such a way that revealed a hidden beauty, subjects that many would simply pass by.

His work gained recognition after winning an international watercolor competition through American Artist magazine, appearing on their cover in 2005. He’s been featured in numerous other publications since, and has become a sought-after workshop instructor who paints and teaches internationally. He became a signature member of the prestigious Plein Air Painters of America (PAPA) in 2012 and served as their President from 2015-2017.  His paintings have won numerous awards, including the Bronze and High Winds Medals from the American Watercolor Society, and he was their demonstration artist for the 2018 Exhibition.  His love of painting on location also led to him being a featured presenter at the 2014 and 2016 Plein Air Conventions and inclusion in the 2017 Qingdao International Masters Watercolor Plein Air Event.

Please go to the current issue of the Valley Watercolor Society Newsletter to see the most up-to-date events.